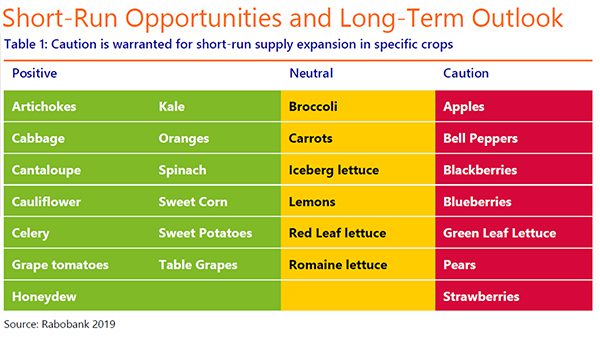 While organic food demand—and sales—continue to rise, a recent Rabobank RaboResearch report suggests grower-shippers take a look at their strategy and put the brakes on production of some fresh produce commodities.

The pace of growth has slowed, and price premiums are on the decline, says Roland Fumasi, senior analyst for fresh produce.

“Retailers are demanding increased organic volumes,” he says. “But retail prices are being lowered to adequately move those higher volumes.”

“Prices are heavily influenced by supply swings, weather shocks, and oversupply is going to pressure price,” he says.

The most recent FreshFacts on Retail Report from the United Fresh Produce Association saw organic produce sales growth slow from double-digits in the past few years to 3.9% in the second quarter.

“To see it soften is something that’s definitely worth looking into more and understanding,” says Matt Lally, associate director for Nielsen Fresh.

While eight of the top 10 organic products in produce saw volume growth year-over-year in the second quarter, prices were flat or down for all but two: carrots and apples.

Rabobank’s Fumasi says retailers are in the driver’s seat when it comes to organic.

“What started as a consumer-centric movement has now morphed into demand for organic product is as much driven from the retailer as it is the consumers,” he says. “In other words, the retailers out there are wanting to put more organic on the shelf. It’s a higher margin. Retailers can tell a better story behind that produce.”

To take advantage, the supply chain has rapidly increased that supply over the last few years.

“Because of that increase in supply, the demand is not moving fast enough,” he says.

“I think they (suppliers) need to be very careful in the short run and go into it eyes wide open and take a look at what we’ve done here and realize in the short run there’s going to be some pressure in profitability,” Fumasi says. “Over the longer run, we think that there will continue to be expansion of organic demand, and we also think that the value chain will figure out how to produce organically at a lower unit cost. That’s really the key that ensures the long-term success.”

Growing a commodity in the caution list? Fumasi says differentiation is essential for profitability.

“It’s very important that growers understand that they may be sitting in a particular geography that puts them in an area where it’s still very profitable,” like a niche season, or hyper local specialty, he says.

“Even in apples, if a supplier has a specific variety or proprietary cultivar, and they’ve got the right relationships in place for the right retailers, they may be able to maintain adequate organic premiums,” he says.

Fumasi says the organic consumer is changing as well. Core organic shoppers, true believers, can only absorb so much increase in volume, and the occasional shopper is more price-sensitive.

“The vast majority of consumers aren’t concerned with whether it’s grown organically or not,” he says. “They’re looking for a high quality, good tasting experience that’s affordably priced.”