First, a high fever. The skin goes flushed, purplish. There is a discharge from the eyes and nose. Bloody diarrhea. And within days, death. The survival rate is near zero.

By China’s official estimates, the present outbreak of African swine fever, which affects pigs but is harmless to humans, has already been catastrophic. More than a million pigs have been culled, according to the Chinese government. A billion-plus pork-loving people are facing much tighter supplies. The need to fill the gap is influencing meat markets worldwide.

But the reality of the epidemic may be grimmer still. Several farmers said in interviews that they had not reported potential infections among their animals to the local authorities. Others said officials had not responded quickly to reported outbreaks.

As a result, many farmers and livestock analysts say they assume that the highly contagious disease has infected more pigs, in more places, than Chinese officials have acknowledged.

When Ge Xiuxiu’s pigs started dying this year, he did not tell the authorities. Mr. Ge, 48, doubts that the government can afford to keep its promise to compensate farmers like him who have been affected by the outbreak.

“Reporting it wouldn’t have made a difference,” he said, standing outside his farm in Xijiahe, a village in China’s Shandong Province. “Who would have done anything about it? Whoever does anything has to pay up.”

The need to get a grip on African swine fever could not be more urgent for China, the world’s largest producer and consumer of pork. Yet the official response seems to fit a pattern from previous crises involving public health and safety in the country, including an AIDS epidemic in the 1990s, an outbreak of severe acute respiratory syndrome in the early 2000s and a widespread tainting of baby formula in 2008.

The authorities’ tendency to hush up such problems engenders public distrust. Distrust makes the problems even harder to solve.

In the current crisis, the distrust is being felt not just by farmers and industry specialists, but by consumers as well. Some Chinese shoppers, skeptical of assurances that the disease does not harm human health, are starting to shun pork.

African swine fever, for which no treatment or vaccine exists, has spread to every Chinese province and region, and has also jumped the border into Cambodia, Mongolia and Vietnam. Analysts at the Dutch bank Rabobank, which lends heavily to the global agriculture industry, have predicted that China will produce 150 million to 200 million fewer pigs this year because of deaths from infection or culling. That would be a hefty chunk of the 700 million pigs slaughtered in China in 2018.

The Chinese economy, already slowing, is starting to feel the effects. Higher pork prices helped push inflation to a five-month high in March. The nation’s stock of live pigs has fallen by a fifth from a year ago. The government, anticipating shortfalls, has bought frozen pork to build up its strategic reserve. Hog futures in the United States have rallied as traders bet that China will buy more American meat.

China has introduced new hygiene requirements, imposed quarantines and restricted the transporting of swine. But such measures will be of limited use if the authorities have an incomplete picture of the problem — or if they have more a complete picture that they do not make public.

“There’s no way to control something that you don’t acknowledge exists,” said Christine McCracken, a Rabobank analyst. In places where infections were not reported or acknowledged, farmers and pork producers might not be taking adequate safety precautions, she said. They may even be selling and processing infected animals. African swine fever can linger for weeks or months in uncooked and frozen pork.

“It only takes one infected piece of meat entering the chain to muck it all up again,” Ms. McCracken said.

The government has threatened to punish farms that do not immediately report outbreaks. Across China, though, dead pigs have been found heaped in rivers and ditches, suggesting that farmers disposed of them without notifying the authorities.

In February, a farm owner in Hebei Province said on social media that the local government was not officially confirming a potential outbreak at his company. Fifteen thousand pigs had died, the owner, Sun Dawu, wrote.

The post, which included a photo of Mr. Sun’s dead swine in a pile, circulated widely. Two days later, the Ministry of Agriculture confirmed the outbreak, Hebei’s first.

From the central government to the local authorities, “which of them actually wanted me to report the outbreak?” Mr. Sun said in an interview. “Everybody is afraid of being held accountable.”

Across China, the timing and pattern of confirmed cases suggest that infections are being declared in some places long after pigs fall sick, said Bi Jie, a livestock specialist in Tai’an, a city in Shandong Province.

The government announced China’s first case of African swine fever last August, in the northeastern province of Liaoning. Within weeks, cases were being declared in provinces hundreds of miles south.

The disease is unlikely to have traveled so quickly, Mr. Bi said. It is more plausible that pigs had become infected in all of these places weeks before outbreaks were officially declared. “If you look at the situation that is being reported, there are things that can’t be explained,” he said.

The Ministry of Agriculture did not respond to a faxed request for comment.

Shandong, where Xijiahe sits, is China’s second-most populous province and a major producer of pigs. Yet the national government has confirmed only one case of African swine fever in Shandong so far.

Earlier, Shandong-made pork products reportedly tested positive for the disease in Taiwan and the eastern city of Hangzhou. But the authorities did not declare infections in Shandong at the time. 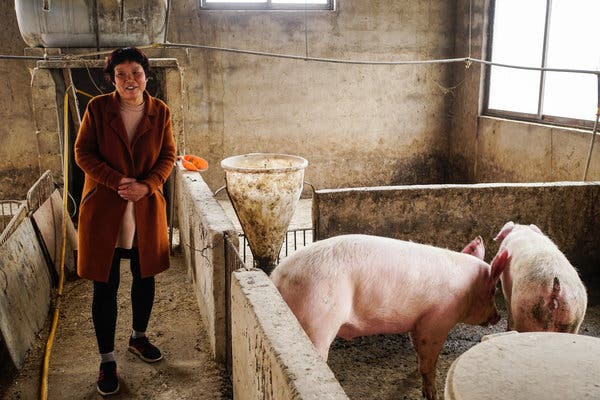 In the Shandong village of Hejiage, He Shuxia lost some pigs this year to what looked like African swine fever. Yet she said nothing to the authorities.CreditRaymond Zhong/The New York Times

Animal health inspection offices in Shandong’s provincial capital, Jinan, are short on staff and funding, according to an internal report that was issued in January by Jinan administrators and reviewed by The New York Times.

“This makes it difficult to do what is needed to prevent and control African swine fever,” the report said.

Recently, after reporters discovered piles of pigs rotting near villages in Shandong, a local official was asked on television whether he had been aware of illegal dumping. The TV host repeated her question eight times before the official, visibly uncomfortable, admitted that he had not.

In Hejiage, a village in Shandong, He Shuxia lost some pigs this year to what looked like the dreaded fever. Yet she said nothing to the authorities.

The animals died too quickly, Ms. He said. She was also afraid of further contaminating her farm by welcoming outsiders or going out herself.

In nearby Junan County, the disease control center of the Bureau of Animal Husbandry has not been contacted by a single farmer about possible cases of African swine fever, said Zhao Guihua, the center’s deputy director.

Mr. Zhao said he had, however, received a call from a farmer whose pig chewed through a wire and electrocuted itself. 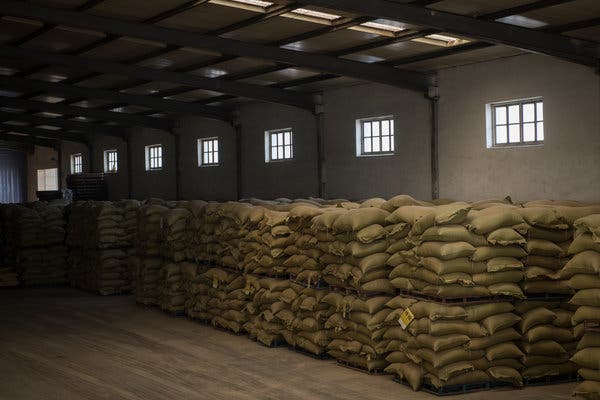 Asked why farmers might not have reported infected pigs, Mr. Zhao said the only reason he could imagine was that they did not have any.

Asked whether he found it strange that Shandong had reported only one case of African swine fever while neighboring provinces had reported more, he laughed.

“What’s strange about that?” he said.

In a faxed statement, Shandong’s Bureau of Animal Husbandry said the province had strengthened its systems and controls, “slowing and reducing the occurrence of the African swine fever epidemic in Shandong to the greatest possible extent.” The statement said Shandong had strictly followed national rules about reporting and confirming outbreaks.

Financial pressures may be shaping local officials’ response to the epidemic. China is promising around $180 for every pig a farmer culls from an infected herd. This cost is split between the national and local administrations. But the central government pays a bigger share in poorer provinces, which might give wealthier provinces like Shandong an incentive to avoid reporting suspected outbreaks to higher authorities. The national government ultimately decides which outbreaks to confirm.

Chinese officials have blamed poor hygiene at small farms for the disease’s spread. In Shandong, however, the sole confirmed case of African swine fever was discovered at the Wangaofa Animal Husbandry Development Company, which has modern equipment. The facility is empty now, the ghostly hallways splattered white with disinfecting lime.

A nearby farmer, Gao Shouguang, was ordered to dispose of his pigs, even though they had not gotten sick.

Workers came to bury the animals in the middle of the night, Mr. Gao, 58, said. The stench was awful.

In Hejiage, Ms. He said she was still too rattled to do so. Mr. Ge, in Xijiahe, said that he and his wife might try growing strawberries this year instead.

“We have nothing left,” he said.

Gao Shouguang was ordered to dispose of his pigs after an outbreak of African swine fever at a neighboring farm. Workers came to bury his animals in the middle of the night, he said.CreditRaymond Zhong/The New York Times